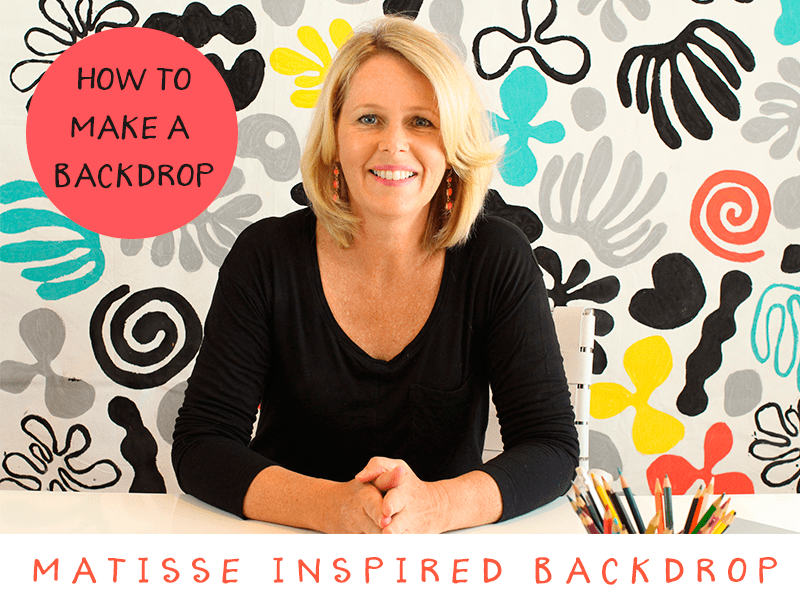 I really don’t know what happened.

I was in the middle of writing copy for my newsletter when my eyes settled on a Matisse book. I have a large format one that’s meant for coffee tables so it’s quite a distraction.

The next minute I was drawing large organic shapes and cutting them out wondering what I should do with them.

And then of course, I was on my hands and knees painting the reverse side of my painted backdrop that I use for some of my videos.

I don’t know if you make videos but it’s always fun to have a few backgrounds to capture the mood of your reels instead of shooting with a bed or a couch in the background. And by the state of my bed and my couch, I wouldn’t do that to you.

I love Alisa Burke’s colorful backdrops, so she’s the real inspiration, not Matisse.

If you don’t need the backdrop fro videos, I think it would make a fun backdrop for a photo booth.

First off all, I used an old king size sheet painted with regular household latex paint. I placed the sheet on the garage floor over top of some painting drop cloths. This is necessary because the latex paint will seep through the fabric.

I painted the sheet with an off-white as that’s what I had on hand. Bright white would be better if you had a choice.

After the paint has dried, you can paint whatever you want on top of the white paint. I’ve done a few things like painted aqua swirls, which you can see here.

For the Matisse backdrop, I drew some large organic shapes on 8 x 10 cardstock. You want at least two large scale shapes and a couple of medium shapes. The smaller shapes can be drawn directly onto the backdrop.

Starting at the top of the sheet, trace the templates, mixing the order, turning up side down and reversing the shapes. If there is extra space, I added a round shape to fill the space.

This was the hardest part. I wanted to go all black but my daughter suggested adding grey with pops of color. I agreed that would be interesting so w mixed up some liquid tempera paint. I used Faber-Castell which doesn’t dry to a chalky finish and doesn’t crack like most children’s liquid tempera paints.

We decided that for every 3-4 black and grey shapes, we would add a pop of color. We originally wanted just to outline with color, but that didn’t look as nice as we though.

HOW LONG IT TOOK

Tracing the shapes onto the fabric with a pencil took about 2 hours.

Mixing the paint about 30 minutes but the most time was spent painting the shapes. A good 5-6 hours. Maybe more. I lost count.

PS:  If you’re coming to my workshop this summer you will probably see this as one of our Photo Booth backdrops, otherwise get used to it as it will be in many of my videos!

After years of shooting videos for my e-courses and YouTube channel, I finally found the right logistics formula. What’s a logistics formula? Well, first of all, it’s my own made-up word for the setting up the equipment to shoot a video. I’m going to be honest.  Everyone says that it’s super easy. But I always found that shooting videos has been very time-consuming.

There is always something that goes wrong:

– the shot is out of focus

– You didn’t turn on your mic

-Dead mic batteries (which you only find out about later)

I could actually goon but I want to encourage you to take videos and not the opposite.

But here’s the BIG secret.  Do you know the easiest way to shoot videos?

Get out your iPhone. Yes. Your iPhone! If you have a 5s or better, the picture and video quality is really quite good.

I used my iPhone for almost all of my above shooting like this video and this one. It’s actually pretty simple to rig up a combination of PVC pipes, a camera selfie stick and your phone to create a stable video. This is the tutorial I followed.

But if you want to shoot yourself talking to the camera, you may want to consider the following:

HOW TO SHOOT AN ART VIDEO 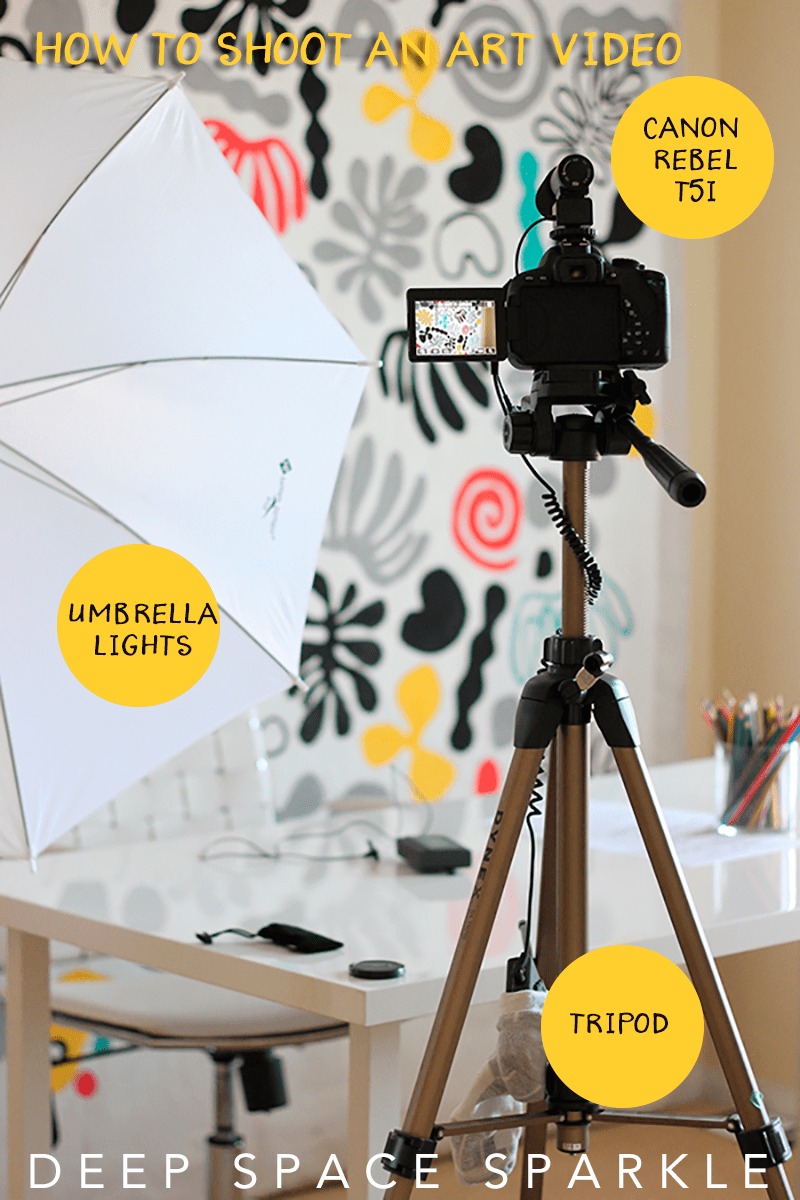 For years I used one camera to shoot all my video shots. I first started with a small Canon Cybershop then quickly moved on to my first DSLR; a Canon T21.

With the help of a tripod, I would film me talking to the camera then move the camera to an overhead or angle shot behind me to get a shot of my hands. That system wasn’t easy. It would take HOURS to film one 15 minute video.

Then I got a  Canon EOS Rebel T5i

(affiliate link to Amazon) with the swing mounted viewer and life got a whole lot better.

Now I have the T5i positioned in front of my art table, with a nice backdrop behind me with some lighting so I can shoot at night or on sunny days. This set-up works great as I have a separate camera (and batteries and card) for the front shots and my iphone/overhead shot set-up for the actually art demo.

And then, when I want to take pictures of the shoot, I use my T2i. No more changing cameras.

This has literally saved me hours.

One thing I’ve learned with being a solo-entrepreneur, art teacher and content provider is that streamlining and automation is the only way to go–even it that means buying an expensive camera for this purpose. I can’t serve YOU and provide lesson ideas without constantly figuring out easier and more automated ways to deliver my content.

Do you create your own art videos?

If you do, I’d love to see them! Share one link in the comment section so we can look for you on YouTube or see in you in action in your classroom.